Connect Health’s CMO and Team GB Doctor, talks about the logistics of getting around to each venue and the incredible Gold medal diving win.

Five years hard work materialises (or doesn’t) in an hour of one day… such is the nature of sport!

Last week I reported that we would be soon moving from preparation to competition. As soon as the opening ceremony was over, the mood palpably changed in the Team GB block from recovery from travel and final training sessions with a sense of “glad to be here” to absolute focus for the job in hand.

Medically the GB team has been largely good with none of those pre games trauma that can happen in the last training session etc. The team was/is fit and ready to go.

The first couple of days are traditionally quiet for GB medals – I attended the GB Ladies Hockey opening game with Germany on Day-1 which was a narrow defeat but with games to come to right that.

The venues are spread around Tokyo – there are two options for travel. There are buses from the village which anyone with appropriate accreditation can jump on and be transported to the arena (I am accredited for all areas of and sports of the Olympics as a Team GB HQ doctor so I can travel to and medically support any sport if needed). The other option is to take an Olympic Car from a pool assigned to Team GB where “Performance Services” that I am part of, have access to five. We are not allowed to get out of the car outside the village or venue so as to stay in the “bubble’’ a concept all will be familiar with now. So, I can’t pop into a shop, fill with petrol or do anything else outside – just me and sat nav door to door.

I know you will all know what happened – Gold medal for Tom Daley and Matty Lee in the 10m synchronised diving… my sport as Chief Medical Officer for the last three years. So here was my day – and what a day !!!!…

In the morning I took a car out and dropped one of the other doctors at Rugby 7s as he couldn’t get there – a one hour drive. I then headed across Tokyo to Fencing where sadly our fencer was knocked out in round one. Given Taekwondo was in the same venue I looked in briefly and saw the round one for Lauren Williams who won the Silver medal later in the day… her fight lasted 50 seconds as she knocked the Tongan girl out with a concussion from a head kick very quickly!

So, then the day took off. I took my place at 3pm at the Aquatics Centre amongst the GB Team watching from the athlete viewing area there is at every sport. Japan team were in front and China – the favourites across to the right. I believe everyone at home was hooked into the tension like we were. When the Chinese made an error in Dive 5 and we moved into Gold medal position the tension was massive. Tom and Matty pulled out a great last dive, but the Chinese can get full scores of ten and do often, when it matters. So, when they dived beautifully there was a sense amongst the team that the Chinese may have done enough… It was an age until the scores came up and then just elation… I had a tear in my eye because I know how much it means for Tom, for Matty and for the whole team. Funding is linked to medals so as well as the individual glory for the athletes, the sport, the coaches and the staff have succeeded, and this protects funding for future games- there is much at stake for all!

We all rushed down to the competition area which was alive with joy:

I am sure you all saw the medal ceremony and the interviews (that I haven’t had access to due to broadcasting restrictions here) and the joy!

The opportunity for some pictures with the medallists is a reward for me – it doesn’t always happen for backroom staff in sport as it’s all about the athletes, but the guys were great and here it is: 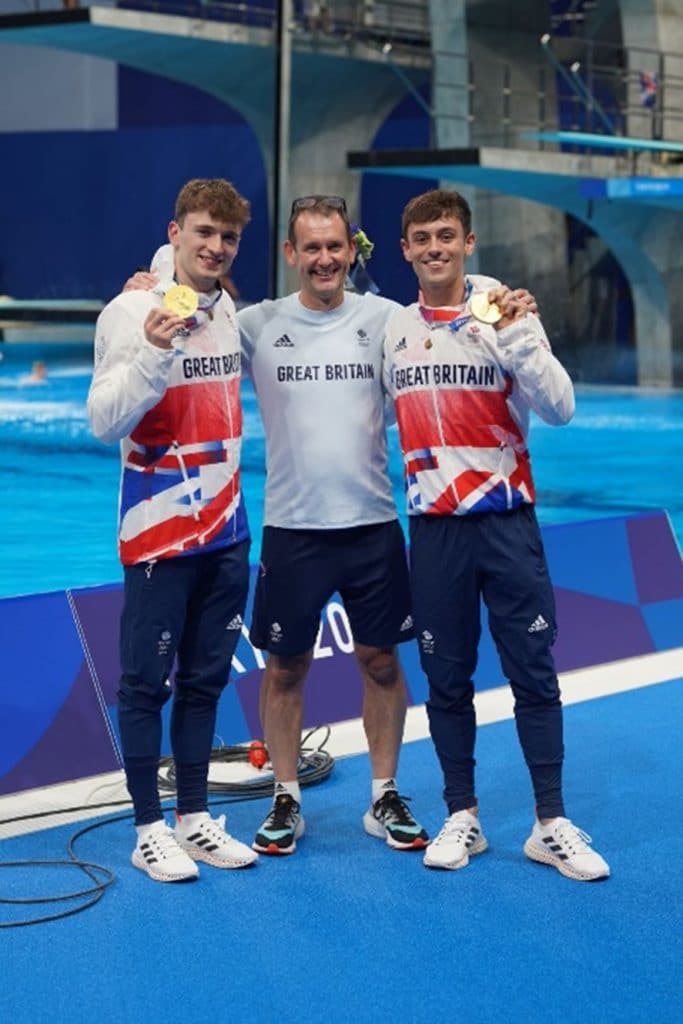 One of the roles of the team doctor is to accompany the athletes for drug testing. If you win an Olympic medal drug testing (urine samples) is inevitable. It’s my first testing with Diving and they were so quick to pee! The hockey, rugby players I am used to, are usually dehydrated and it can take hours to produce enough. These two were done in 30 minutes but given the interviews etc prior to drug testing, it was now almost 2 hours post event, all the others had left for the village. Seeing as I had the car I drove the guys back to the village… unique time with them both as they read all their messages in the car with gold medals on their laps!

Here as we arrived back at the village to park the car (brief removal of masks for photo!).

Two great guys – well deserved success for many reasons and a great back-room team to support. Five years hard work materialises or doesn’t in an hour of one day… such is the nature of sport! Near the end of a great day for them and for me!

We're proud to announce the appointment of Professor Bhaskar Dasgupta as Lead Consultant at Connect Health!