Graeme’s final blog where he reflects on his main memories of Tokyo 2020. He pointed out that the Olympic Village was probably the safest closed community on earth and hats off to all involved, particularly the Team GB Covid Officer (a physio by training) who worked long hours, attended many meetings and overcame many hurdles – he deserves a medal!

I am writing this from 40,000 feet somewhere over Russia on the trip back home. I am hoping the plane won’t land in Belarus!

I last wrote with 4 days competition left and of course it’s now all over. The last 4 days were strange in that whilst competition was continuing, most of the teams, athletes and associated staff had left so the Village and the Games had become really quiet again. The Olympic Committee changed the rule from athletes and staff having to leave within 48 hours of your last event to 24 hours. This was because starting on the middle weekend, on the evening of their last event some athletes and teams were partying, and social distancing was abandoned. I know this because the parties were in the park area out the front of Team GB block and they went on all night with singing and shouting and various activities. The security didn’t stop this, but the concern was that having been all together all night, leaving another day and another night before leaving was a risk for Covid spreading hence they brought forward departure to the next day. Probably a good move. The GB team were not involved in this on the whole though we did have a controlled party in Team GB block after the closing ceremony…. but for Team GB only – a large chap from Khuzestan had to be politely ejected.

So as to sport there was cycling, the marathons, modern pentathlon, athletics relays which we had medals in and for me, the individual 10m platform diving which you will be aware Tom Daley won a bronze to add to this Gold from earlier. 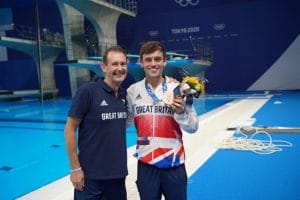 All the athletes who medalled received a bottle of champagne and so after the second medal and with no more competition, Tom kindly shared 2 bottles with the Diving team left in the coaches apartment – seven of us polished that off before he went to be interviewed by Claire Balding at the BBC. I saw him and the remaining Diving team off the next morning.

Also leaving that morning were the ladies hockey team who also won bronze at a match I attended – they played in 44 degrees heat. I know several of them from Rio Olympics and one from the London 2012 team that remains when I was GB hockey doctor – great to see them medal yet again – three medals in three games in a row is a great achievement for a great group of players and coaches. 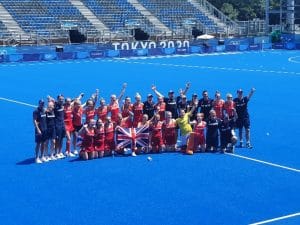 Once the marathon was over Sunday morning and our last boxing gold in the afternoon, it was time for the Closing Ceremony, which I was lucky enough to attend. Usually many of the athletes wait for this and all fly home together (you will recall the Jumbo Jet arriving from Rio with all the medallists and others on board). This time with Covid and leaving post event, the only athletes left were a few athletics sprinters from the relays and modern pentathlon. So, all the medical team were invited plus most of the remaining staff!

Going to a ceremony means lots of hanging around waiting. You wait to get on buses in the village, the buses travel in convoy to the Olympic Stadium, we got off and waited for about an hour outside the stadium and then walked through the inner walkways to queue awaiting the time to enter and then walk out onto the pitch for the remainder of the show plus extinguishing the flame.  The one lasting memory of this whole process was that as they closed the roads for the convoy of buses, for the first time the Japanese public were able to line the route and see one part of the Olympics – the streets were lined with people waving… It was sad that they hadn’t been allowed in the events but here they all were excitedly waving – quite emotional for what could have been. 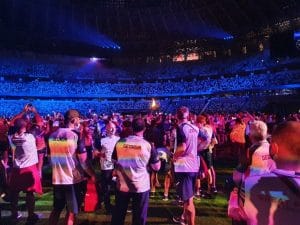 So, the next day on Monday all remaining athletes and teams left. I remained for 2 days with other British Olympic (BOA) staff to help clear the rooms and building of all Team GB furniture, posters on walls, sofas, all the plinths, stores and IT/ electrical equipment and a whole host more placed by the BOA in the three weeks prior to the Games. All had to be moved to the basement and picked up in trucks and taken to the three Team GB shipping containers. We separated it all into one for stuff of no future use to be thrown away, equipment to be shipped back to London which will be re used in Paris 2024 and a container to be shipped to Beijing for the Winter Olympics which is in February 2022. Usually this doesn’t happen but with the Tokyo Games a year late, the Winter Olympics now follows soon after.  So, a lot of clearing, lifting, sorting in hot, hot conditions! All part of the role.

A word on Covid

Despite the concerns before, the Games was completed with minimal covid infections amongst those in the village. No GB athlete or staff member tested positive in the village – we had daily PCR tests as did all countries – I managed 30 in my time there! Most of the cases reported were early on and were brought in from the home country and emerged after arrival. These were few, were picked up in the daily testing and led to some having to miss their event (e.g., USA pole vaulter) and contacts isolate for 10 days in their flat. At the end of the day, there were no Covid hospital admissions at all and no evidence of Olympians infecting the local population nor the converse. As someone said – the Olympic Village was probably the safest closed community on earth!  Given the pleasure the Games gave to people all over the world the decision to go ahead was a good one and so to all the doubters and critical press – eat your words!! It was a lot of effort however and hats off to all those directly involved. The Team GB Covid Officer (a physio by training) worked long hours, attended many meetings and overcame many hurdles – he deserves a medal!

Wednesday 11th I left the village early for the airport and here I am enroute to the UK. What are my main memories of Tokyo 2020: 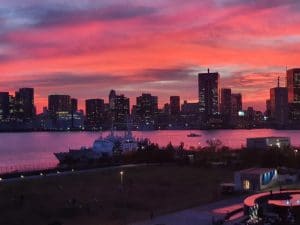 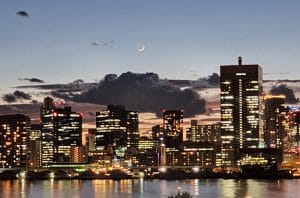 We're now in the final week of #Wimbledon 🎾

We would like to wish all players the best of luck in the lead up to the finals!